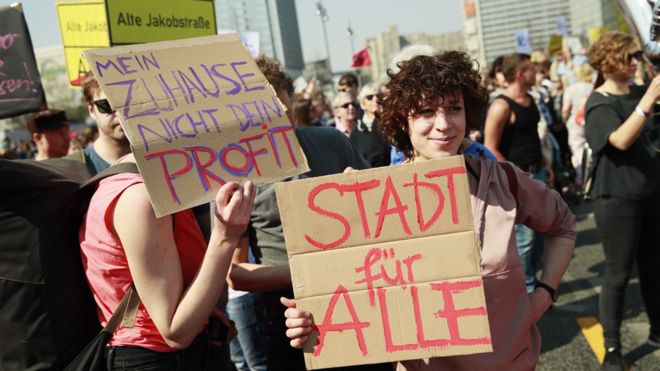 Berlin’s left-wing government has approved a plan to freeze rents in the German capital for the next five years.

Rents have risen sharply in the city and there have been rallies urging the authorities to keep housing affordable.

The plan is expected to become law in January. It could apply to 1.4 million properties, but not to social housing – regulated separately – or new builds.

Berlin rents however rose by 7% in the first quarter of this year, and in the past decade rents have doubled as the booming city has become a magnet for jobseekers.

The most expensive for rents in Europe is London: the Evening Standard reports that a typical two-bedroom flat in Southwark, near central London, costs £1,573 (€1,760; $1,970) a month.

The Berlin draft law, approved by the city’s Senate, is being keenly watched across Germany, as there have been many complaints about housing costs elsewhere too, for example in Hamburg. The Berlin regional parliament still has to vote on it.

The left-wing Social Democrats (SPD), in power in Berlin, favour a national rent cap, but critics point out that the housing market varies considerably from one region to the next.

The flyers appeared overnight on lampposts in my neighbourhood. A picture of a young couple who explained that they were flat-hunting and, as professional photographers, would offer a free photoshoot to any landlord who’d take them on.

It’s not an unusual phenomenon. One woman recently offered to bake regularly for anyone who’d rent her their flat.

Berlin can’t build affordable accommodation fast enough for the city’s rising population. An open showing of a newly available flat is likely to attract well over 100 hopeful, would-be tenants. Demand is pushing up rents as corporate investors buy up and renovate old or dilapidated buildings, and it’s pricing Berliners out of their old neighbourhoods.

Demand and rents are rising in many other German cities too. Berlin is, by comparison with somewhere like Munich, still relatively cheap but, even as the Berlin authorities ponder their response, Chancellor Angela Merkel has promised to take action over what is an increasingly sensitive subject for the electorate.